A journalist and communications officer of the Southern Kaduna Peoples Union (SOKAPU) Luka Biniyat is being held by the Kaduna State Police Command over a publication about killings in the state.

The ICIR learnt that Biniyat was arrested by the Kaduna State Command Criminal Investigation Department (CID) and has been detained for more than seven days.

The publication titled, “In Nigeria, Police Decry Massacres as ‘Wicked’ but Make No Arrests,” read in part that some lawmakers said they were outraged by the Kaduna government’s refusal to enforce the law.

“The government of Kaduna state is using Samuel Aruwan, a Christian, to cause confusion to cover up the genocide going on in Christian Southern Kaduna by describing the massacre as a ‘clash,’” Biniyat quoted Danjuma Laah, who represents Southern Kaduna Senatorial District, to have said.

Aruwan, who is the Kaduna State Commissioner of Home Affairs and Internal Security, contacted the Police command that a portion of the article wrongly indicted him.

Following his complaint, Biniyat was arrested and has remained in detention as of the time of filing this report.

The ICIR learnt that the Police command got a detention warrant from Ibrahim Emmanuel of the Chief Magistrate’s Court Banawa, Kaduna State.

Biniyat was eventually arraigned before the Chief Magistrate Court on Tuesday.

During an interview with The ICIR on Tuesday, Aruwan admitted that he complained to the Nigeria Police over the publication.

“That publication has put my life and the lives of my families in danger and I am seeking justice,” Aruwan said.

However, he denied ordering the arrest of Biniyat by the Kaduna Police.

When The ICIR contacted Laah on Tuesday, the Senator quoted in the publication, he hung up the phone and did not answer subsequent calls.

Aruwan said in a response to a petition through his lawyer that Laah denied the statement published in Biniyat’s article. 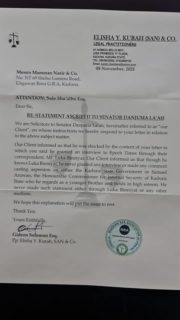 Chairman of the Kaduna State branch of the Nigerian Union of Journalists (NUJ) Adamu Yusuf told The ICIR that the union was initially unaware of the arrest until recently.

Yusuf said the NUJ was planning to organise a meeting between Aruwan and representatives of Biniyat to resolve the issue.

The Kaduna State Police Commissioner, Mudasiru Abdullahi did not respond to calls, texts, and WhatsApp messages from The ICIR.

Also, the Kaduna Police Public Relations Officer Mohammed Jalige did not answer or reply when contacted by The ICIR.

On October 10, 2014, before Aruwan was appointed as a commissioner in the state, he had also accused ‘elite the political class and other viable institutions’ of ‘perpetual silence’ over Southern Kaduna killings.

Section 380 (2) of the Criminal Code states that “The criminal responsibility of the proprietor, editor, or publisher, of any periodical for the publication of any defamatory matter contained therein, may be rebutted by proof that such publication took place without his knowledge and without negligence on his part.”

However, Biniyat was arrested and detained by the Police.

A lawyer, Olayinka Olaore, who spoke with The ICIR over the matter, said although defamation was a criminal offence in Nigeria, it was usually settled in a civil manner.

“Usually, what happens is that the alleged will write to the person or organisation who made the allegation, sometimes demand that the publication be deleted or a rejoinder is published and in some cases, they go to court and settle it in a civil manner,” Olaore said.

She said it was unusual that someone would be arrested for a publication in Nigeria. – ICIR